Several years ago, you found yourself in quite bad health, and at 90-years-old-minus-a-week you called all your family to your side. You wanted to have a funeral that you could enjoy witnessing before you died, and you desired that each of us write you a letter, something that we would have written about you and chosen to read at your funeral. Barely 18, I didn’t really know what to say or write.

It was all very morbidly practical, so everyone said sure, let’s do it. But still I wrote nothing. All the cousins & their kids came over from England, and we had some serene moments together during their trip. Yet nearly 4 years later, my grandma is still around. You’re not kicking too much these days, but you’ve started talking about your funeral again, so I decided to finally write that letter. Since that last big birthday bash, there have been a few more health scares and you’re nearing 94 years of age. Just before your last birthday and right before I left the States semi-permanently for Korea, nearly a year ago, you told me all about how your real funeral event would be. 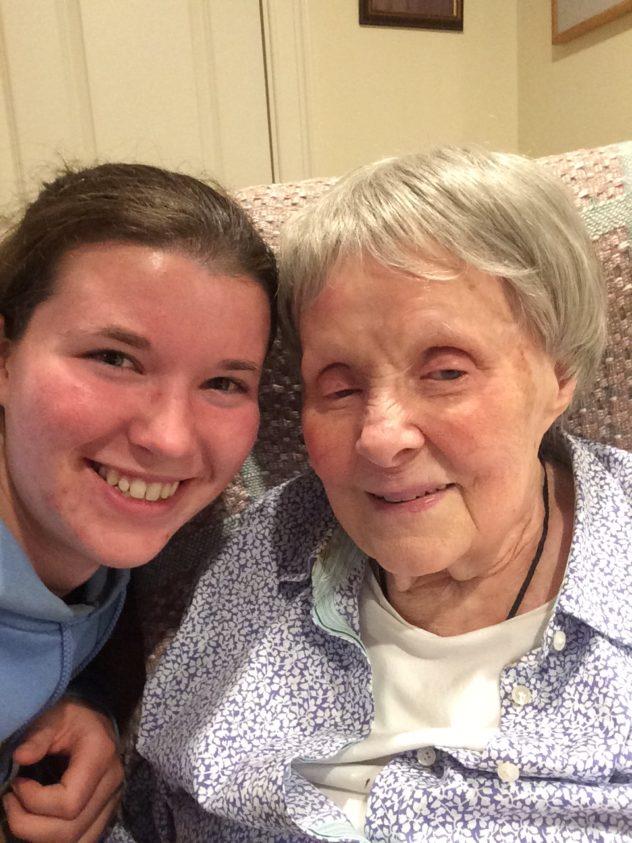 At the airport while waiting for my flight to Cambodia earlier this month, I called dad to chat; he told me in no uncertain terms to call you instead, because your heart was taking another turn for the worst, and this time it would not be bouncing back. I already call you a couple times a month, but it used to be much more frequently. You used to be more optimistic, thinking your good health would last as a post-octogenarian, but it didn’t, really. I still remember spending the few days I had off of work after my nineteenth birthday sleeping restlessly on an air mattress in the corner of your apartment, terrified that any second I’d hear the thump of a frail old body hitting the floor again.

I’m sure it’s hard to forget that you had fallen the weekend before, and it was really bad. They truly weren’t sure if you’d make it through that first week. Everyone was so exhausted that they put a teenager in charge overnight. There was backup staff, but I was hoping I wouldn’t need it. Over those few days I got me a taste of being a parent, and I didn’t like it one bit. But then again, neither did you. Your body was broken and bruised, but your mind was and is vigilant. It’s bad enough having your kids help you use the bathroom, but to have your teenaged granddaughter help you wipe your butt is another low you probably never envisioned. 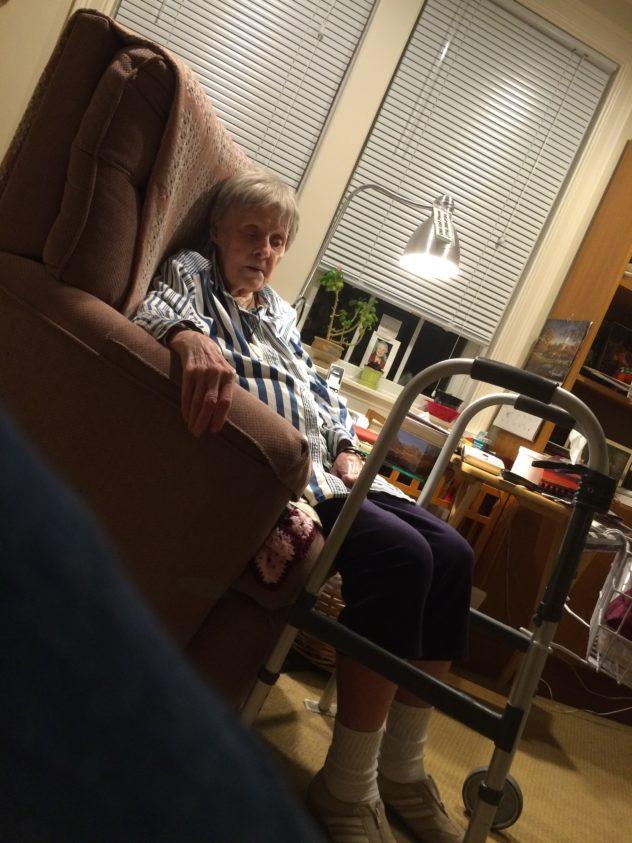 Grandma in her chair. You should hear her out-snore the helicopters that occasionally passed overhead!!

Even though I’ve been calling you once every week or two since I graduated high school (the point at which I finally realized that I don’t know everything), we’re still not very close. I’m not very close to anybody. But I love you, so much. Sometimes you makes me cry with how straightforwardly you talk about impending death and your continued mourning over the loss of grandpa just five years ago; dementia killed the sixty-five year marriage, but it could never destroy the love. Yet people ask why you’re still sad. 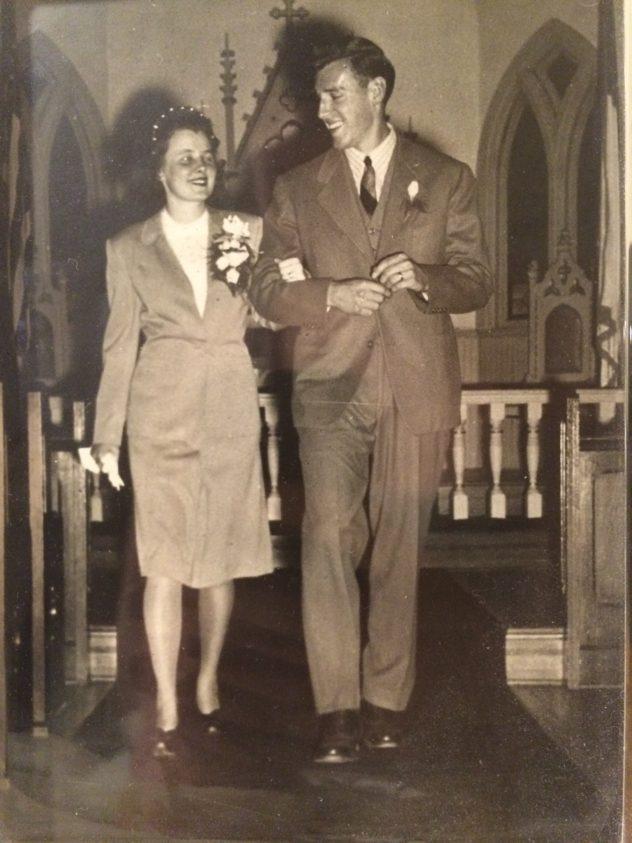 Every time your memory wanders past the six or seven stories you keep on deck as talking points, I realize again how similar we are. After marrying in your early twenties, you & grandpa made the conscious decision not to have kids for at least five years and then stuck to it. You two traveled to what, thirty was it?, countries during your life together, mostly in the 1940’s and 1980’s in the Americas and Asia. I can’t even imagine. You settled in to have kids in the 1950’s, but have reinforced that my wanderlust came down through my genes rightfully.

My dad’s parents and siblings.

You tell me about your mother, Holda, who grew up the child of Swedish immigrants to America over a hundred years ago. People learned more of their history back then, and kept it in their heads because there were no machines to do it for them. I want to be more like you as I grow up, taking advice from my mother and exercising like my father and leaving my comfort zone like my sister. I want to grow myself and help teach others to keep growing, too.

Because even you, who flew in planes well before it was even considered that there could be a no-smoking section or that men could be flight attendants and women could be pilots, say that you learn from me. This college-educated career social worker makes me feel on top of the world every time she tells me how nice it was that I called and how she sure does hope to hear from me again soon. As if I could stop calling with such praise & wisdom waiting for me on the other line! I take you to countries you’ve never seen and you walk me through a world I could never go back to. 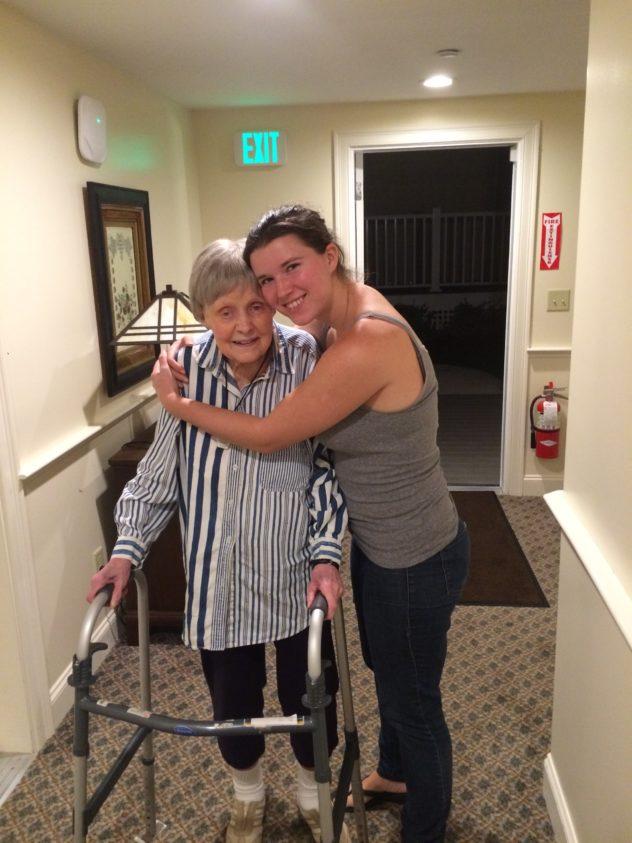 I remember every green “grandma cookie” you baked for us, every grilled cheese and Klondike bar you served up, and I remember the trips to the neighborhood pool and walks through the garden and I hope that you do, too. I hope you see your true love soon. I hope that you get on that UFO and head straight to Venus (the origin of women, right?) to set off exploring together; grandpa never did go along with the norms and expectations. Grandma & grandpa are words meant to be uttered together in one breath.

You teach me pride and responsibility, and make me feel connected to my roots in a different way from my parents and sister, and I can’t wait for your next call, however many we have left. Expiration dates are not always clearly marked. To anyone who might be reading this, take the next half hour to call up someone older & wiser, be it a sister, an aunt, a grandma, a friend— because you’ll thank yourself and be thanked in ways you may never have imagined.

The Baby of the Family

*Edit 18-08-2017: I’m sobbing quietly alone in my apartment, as upon waking up I read a message from my father saying that my grandmother would likely not make it another day, and then another message dated less than an hour later haying that she had passed. My cousin did not make it back to her side on time to read her the letter, so she never heard it. She knew how much I love her, so I don’t have any regrets, but I wish she could have heard more succinctly how much having a relationship with her impacted me; she was always so concerned that I was doing the right thing for me.

The last time I called, just two days ago, I couldn’t make it through a few sentences without crying, yet she was still asking about my trip, or maybe it’s because she was still asking about my trip even though they were hours away from putting her on morphine. I miss her so much, and even though this love letter will never reach her eyes, maybe it will help your letter reach someone else’s.

Hello there is a woman on Facebook that stole the picture of you and your grandma and put her face on it. She says its her grandma and uses it to scam people. Her name on Facebook is Christiana Welshonse. She's using my last name and I don't even know her.

That's very creepy, violating, and a bit frightening-- thank you for bringing this to my attention. I appreciate it.