Have you ever wanted to wander through a lavender field in full bloom, and then lamented not being in Europe in the summertime? Enter: Hani Lavender Farm. Welcome to the late springtime flower fields of your dreams, located just south of the DMZ, in Goseong County! If you’re coming to Korea in May, June or July, this is a can’t-miss. It is a more rural destination, but the area is perfect for walking around or even passing through when cycling in Korea.

Whether you’re looking for a weekend getaway from Seoul or a day trip from Gangneung or Sokcho, Hani has got something for everyone (unless you’ve got a flower allergy). 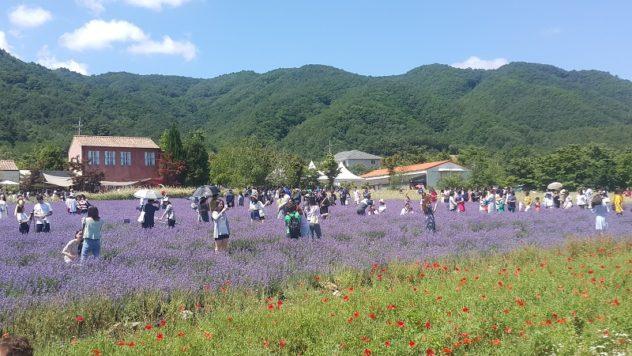 Hani Lavender Fields’ flowers bloom most abundantly & are harvested in June, during which they have their annual lavender festival. During this late spring festival, their grounds are filled with wandering Korean tourists. Selfie sticks are thrust everywhere even afterwards, so keep an eye out before you get poked in it. This year the festival had lessons in soap making, growing herbs from seed, and perfume making, as well as photo contests and exhibits.

During my first visit in 2017, we arrived three days after the three-week flower festival ended. The fields still looked quite full to us, but the owner apologized tremendously, saying that he simply had to harvest right after the festival ended. It was stunning, and even on the weekend the fields were practically abandoned compared to a weekend during the festival. When we went back in 2019, the fields in full bloom were doubly impressive, and the crowd ballooned tenfold!

Despite just barely missing the festival the first time around (and the culling of the herd), we found several fields fully blossomed for both visits. I’m sure they lavender fields are lovely to visit at anytime from early May to mid-July, but call first if you aren’t sure!

Admission to the fields, festival time or not, is ₩4000 per person (~$3.60USD). On-site facilities include bathrooms, a coffee shop, an ice cream stand, a make-your-own pizza restaurant, and a lavender shop where you can buy several products made in-house (some edible) & many imported ones. Visiting After The Festival

Obviously it was a smell to behold, but the views are also spectacular. I wouldn’t mind passing my days here, just swaying in the wind. The place was definitely laid out with Instagram in mind, as they need to entice visitors to come all the way out there. The selfies do not disappoint, though. You could sit in each and every field, watching out for bees, and snap pictures in the strategically placed chairs and benches (ostensibly for the older people in the crowd).

Every Saturday morning at 2pm, the owner comes out of a small house set up in the middle of the property and explains the distillation process for the lavender essential oil he makes with his annual crop. It was in Korean, but my friend helped translate the more technical aspects. The owner gave everyone some lavender flowers, and let us feel the lavender water produced as a by-product of the distillation process. Then he gave everyone a little spray bottle of the sweet-smelling lavender water for free— I’m definitely glad we stopped & listened to the whole thing! They were probably left over from the festival, but South Korea is the land of freebies, and you take what you can get.

The owner seemed nice and eccentric, and I love how much he cares about his plants and keeping his process organic. I was actually very happy to see all the bees pollinating his flowers since their numbers are dying out so quickly. Though conservation doesn’t actually seem to be a problem throughout Goseong, as far out in the countryside as it is. In fact, you would be hard-pressed to get here without a car or a knowledgeable taxi driver. 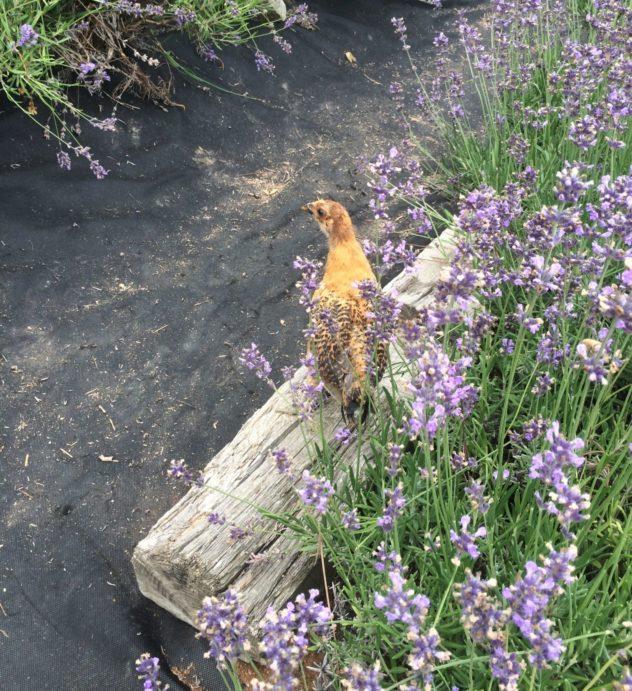 There was even a chicken making eyes at me; it was a nice role reversal.

Visiting During The Festival

There. Were. So. Many. People. Compared to when we visited the first time, I was sort of overwhelmed. And yes, I was still the only (visible) foreigner.

There were also lots of bees roaming around, way more rows of colorful flowers, and absolutely no clouds in the sunny sky (unlike our misty visit in 2017). We arrived just after 11am, and had to park about 3 blocks away, but had the luck of catching the shuttle bus on the way up. Foot traffic at the festival peaked around 1pm, when the lines for icy lavender ice cream (at the cafe) and lavender bing su (at the bottom of the property; made with lavender ddeok & lavender syrup) were the longest.

Hani lavender fields set up 2 small cafes & seating areas just for the festival, along with the usual gift shop. There are also a lot of cute photo-ops set up that were only there during the festival, like bikes and benches and stools set up to capture the flowers in the background. They even sell those huge floppy hats in the gift shop! 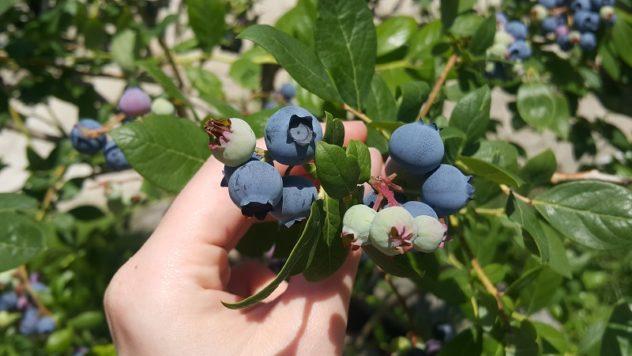 When we left the lavender farm on our first visit, we struggled to find one of the many blueberry farms we passed signs for earlier in the morning. Once we found one, too, the only people we saw were a group of older ladies eating lunch. They nicely called the owners for us and we quickly bought a kilo of freshly-picked berries, as it was cash-only and I was low on bills.

In fact, all I had was ₩15000, and a kilo should have cost ₩20000, but since everyone had driven there for the purpose of selling, they kindly sold us a kilo + a generous cup of samples for what we had on hand. It was an unexpected show of kindness, but one I find a lot in rural South Korea. There were also several signs for the blueberry festival in June, so if you time it well you could easily do both. Korean Festivals are often food-centered and always kid-friendly in the springtime.

On our second trip we ended up at Star Farm, which did accept cards and where I did spend a lot of money on organic blueberries. The owner was really nice, and he told us about the blueberry festival & picking events they hold the last weekend of every June… the weekend after our trip. But we still indulged in the samples, thanked him profusely, and we kindly ordered to pick & eat as many blueberries as possible before we drove off. So we did.

Star Farm sells blueberries by the kilo (with lots of samples), as well as blueberry jam and American-style rice cakes with blueberry bits. Their organic berries are available only during picking season, from around mid-June to mid-July. See his contact information in the pictures below.

Other attractions in Goseong-gun are the Dinosaur Museum, the observatory, and the beach. 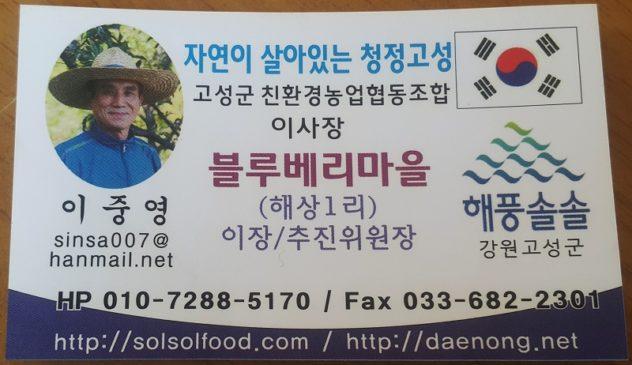 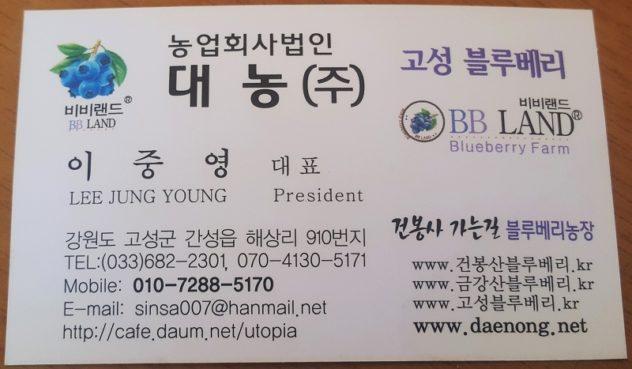 Getting There: Practical Info

From Seoul there are buses direct to Ganseong (간성읍), the main city in Goseong county (고성군), where the lavender fields are located. This is about a 3-hours bus ride. From there you should take a local bus towards Sinan-ri (신안리) and then a taxi to the fields. However, if you want to do a late June beach weekend in the popular city of Sokcho (속초시), this is also an easy day trip from there. However, I’d recommend renting a car or taking a bus from Sokcho to Ganseong station, and continuing from there.

June 1st to June 23rd is the official festival, with a ₩4000 (~$3.60USD) entrance fee per person, and a variety of family-friendly activities and demonstrations. The weekend days are particularly crowded, so if possible, go on a weekday evening or morning. There’s more information on the Korean-Language site of the farm, found here. A beautiful picture at the entrance, which doubles as an easy-to-follow map of the farm.

Warning, But Not Warning Off

The whole morning, I was the only non-Korean I noticed, so just prepare for some strange looks if you’re used to Itaewon-like surroundings. This goes for the lavender fields as well as our other adventures up the coast. One of the things I truly love about living in the southern part of Gangwon province is my proximity to everything. Not all of the provinces has access to a long strip of coastline, but every single one of them has an abundance of mountains and small towns (though not all of these are very well-connected).

Living here, I get to explore the delights of and attend the festivals in Seoul, while still being able to access most any small town in the province one or two cheap express buses, Goseong included. Gangwon countryside shows a perspective of Korea, both food- and view-wise, that people don’t often see. Tourist, expat, or Korean national; don’t let distance or difference scare you off. This is Korea with its best foot forward.

If you found this post helpful, please pin it so that others can find it! When are you heading to Hani Lavender Farm? 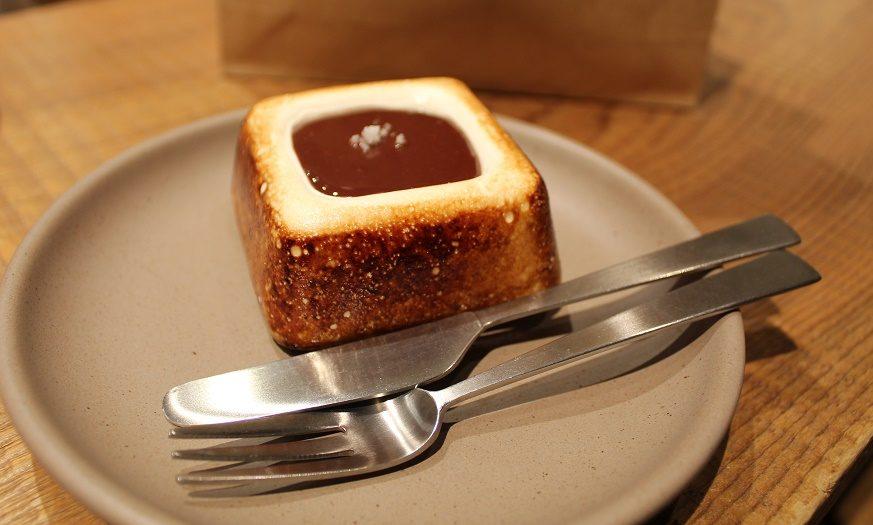 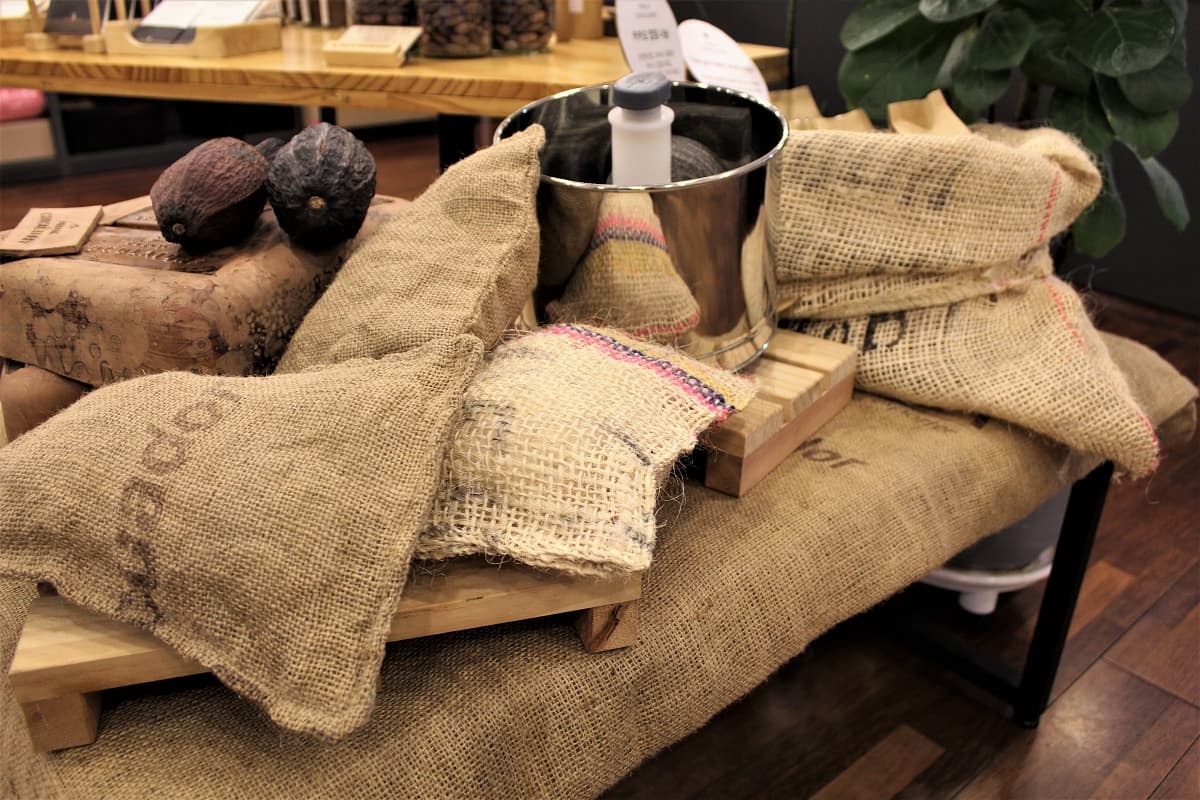 Are the lavenders still there after the festival? I mean is it still advisable to go to hani lavender farm after june 23? Thanks!

Yes! We went a week or two after the festival ended, and that's when the pictures were taken. Should still be lovely then.

is this the farm where it's closer to Pucheon where you could drive like half hour to the Art Valley, and Waterfall? thanks

I can't say there's much going on around Goseong at that time, other than the lavender fields and blueberry festival; certainly no waterfalls. Maybe you're confusing it with somewhere around Gyeonggi-do? There's nowhere around Goseong called Pucheon, as far as I know!

Hello! Are the lavenders already in bloom during the last week of May? Thanks!

I would assume so, but there may not be as many in bloom as you'd see a week later, similar to cherry blossoms. There are several other beautiful flowers growing on their property which may have also bloomed by then, so it's certainly worth the trip.

hi..is it difficult to reach this place? as i want to go to this farm, but i have 2 children.. how about the transportation? thanks

Hi, Aryo! We found it pretty easily when driving over, but we had GPS and a rented car. If you take the bus to Goseong Express Bus Terminal, however, you can just take a taxi (show him the address in Korean), and he'll know where it is or be able to find it with GPS. However, I've recently been told that the festival was cancelled for this year since they haven't planted the lavender-- hoever they may have other flowers you can go see, so it's worth calling to ask! I hope you have a fun trip, if you can make it out there!