Bustling international ports with the erratic histories to match, these two cities currently under Chinese rule are best known as business centers and common stopovers on long-haul international flights. But I found them to be a pleasant final destination as well, and honestly I wish I had been able to spend an extra day in each of the cities to check out the last few touristy sites I couldn’t see within the five days I had planned. Chiefly I found people to be nice and helpful in Hong Kong and Macau, contrary to the common reputation in mainland China.

Even the people who did not speak English revealed it to be so with a smile on their faces, and often tried to point me towards someone who did. Immigrants from the Philippines, India, and Pakistan, as well as Britain and the US, seem to have had the biggest influence upon the cuisine and much of the infrastructure of the territories, lending a crowded but international feel to the Chinese territories. 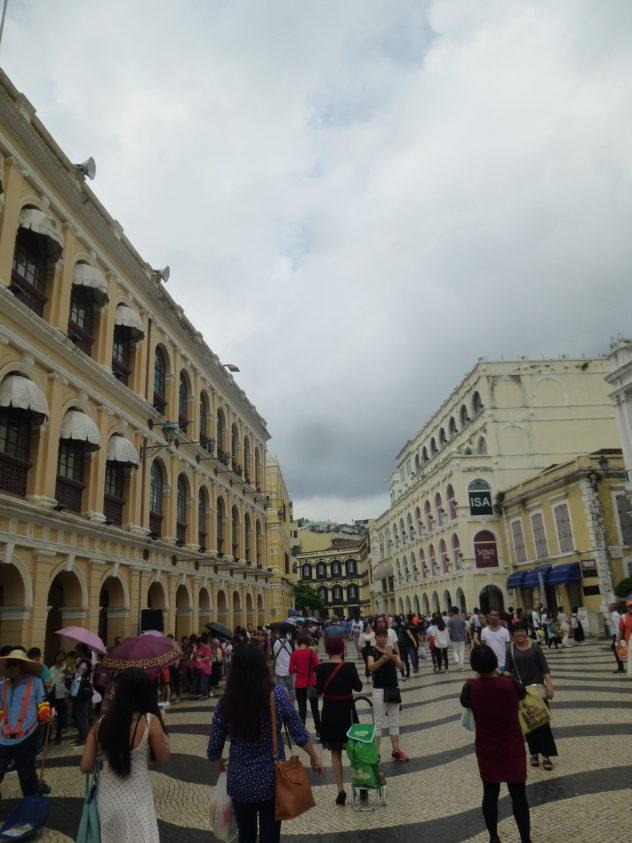 I saw many different angles of the city, some softer than others. Looking back, in a land full of pleasant cityscapes and iconic selfie spots, being bereft of my phone’s camera was probably the biggest annoyance associated with my lack of technology. I managed to charge up my old digital camera and snap a few photos with that, but often the quality felt sort of dull, and unfortunately none of the pictures could tell me which was the correct direction to turn upon exiting the subway.

It’s disappointing to lack the volume of photos I’m used to being able to sort through on the plane home after a trip, and ATMs could be a bit of a struggle to find, but I enjoyed focusing so much on my trip & exploring in the moment rather than wasting time looking for wifi so I could tell people how cool the flamingos I just found were or how delicious milk tea is. 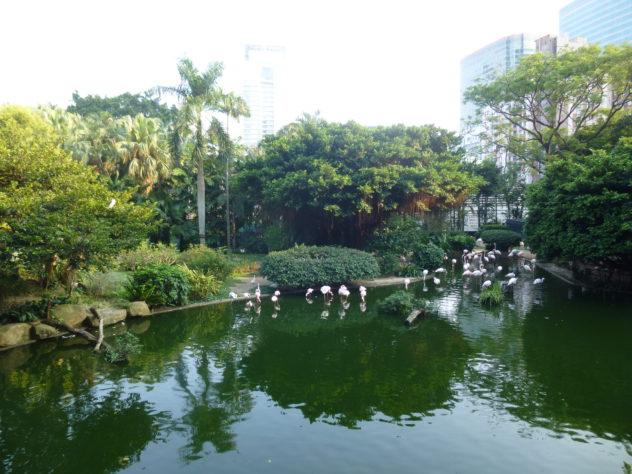 Repeatedly I found myself forced to talk to strangers, asking for pictures or directions or recommendations. Normally I rely on the strangers on the internet for such things, but real people added a much more experiential element to the whole trip— I’m honestly a bit of an introvert, so having to approach people with just my brain to psych me up was a challenge in itself. Even though I reside in an Asian country relatively nearby, I now speak enough Korean to get directions someplace & I can read all the street signs. China was a different experience.

Bars and clubs, at least in the ritzy neighborhood of Central, reflected a much older business and expat crowd compared to Seoul, and the dress seemed to be a bit less casual. Prices were notably higher everywhere. People were harder to just walk up to, since I wasn’t familiar with the customs. Snacks and street food and meals in both countries were quite different from Korea’s, and though enjoyable, neither country’s food created an unfillable culinary void in my heart. If I had remembered to write everything down, I definitely would have included more specific locations I visited, but the wanderlust took me over and my lack of itinerary was never rectified. 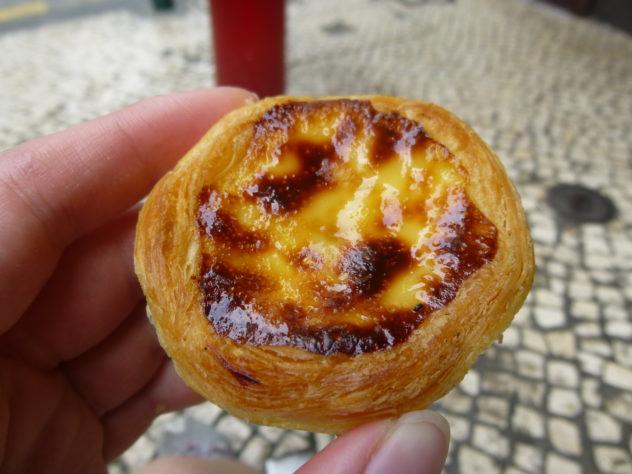 But Macanese egg tarts will 100% be the first thing I go for next time I find myself on a long layover!

Unexpected pockets of nature, though still very much relegated to its place, rounded out my experience. A lot of unexpected things actually popped up around me, and I have found this to be the norm when traveling. By being in a different country, you are automatically out of your comfort zone. Maybe that country even uses a different writing system, like in China or Korea. However, I can read Korean, and I found that an unfortunate part of being illiterate in a country’s language is that there is only so much you can translate into English before a map becomes cluttered.

So even though everything was written in Chinese and mostly translated into English, I often found myself in the middle of a park denoted on the map merely by its name and a few buildings. But suddenly there’s a crowd surging into itself in front of you, and you walk towards it a bit faster to see what all the fuss is. Surprise! You don’t know. But it seems fun, so just go with it! 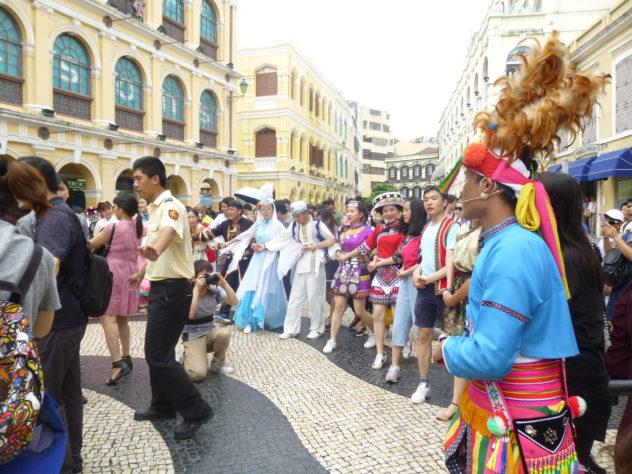 Or there’s a ridiculously long line of people winding all over and down and through the side streets around the square, and all you can figure out is that it ends at a giant red building, still empty and presumably related to Buddha, whose birthday it is that day. You find yourself asking countless strangers to take pictures of you, “to show mom later,” you claim either out loud or in your head, but you damn well know that these pictures are for you. Or Instagram. 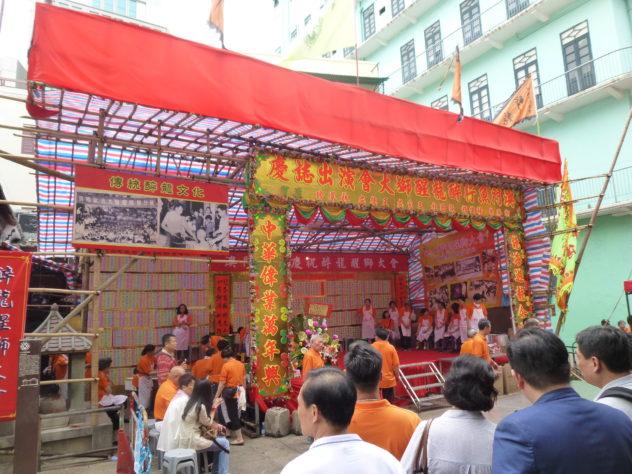 Solo travel can be hard enough, but sometimes its a good way to snap yourself into the moment. Remind the adventurer in you that if you don’t have that GPS or itinerary at your fingertips, you’ll appreciate a local’s perspective and advice all the more. Rather than just the person who checked you in, the woman at the hostel’s front desk becomes someone helping you google how to open a bottle of port with no wine opener after you wandered into a tiny loja de vinhos in Little Portugal earlier that day.

After all, it’s your last night in China, and you should probably celebrate it with a nice bottle of wine that would definitely cost three times more in Korea. Without Facebook to distract you, that bottle of port might even get shared with a few new friends. So sure, if you had internet you might have found the ATM faster when you wanted to buy some local chocolate, but then you never would have stumbled upon an old-fashioned European sweets shoppe when you missed the turn!

I eventually got to most all of my destinations and simultaneously gave up on seeing absolutely everything, as I had striven to do when I first made the itinerary (which I lost when my phone died). All’s the better I say, as I’ll never now the alternative and there’s no use dwelling on what could have been. 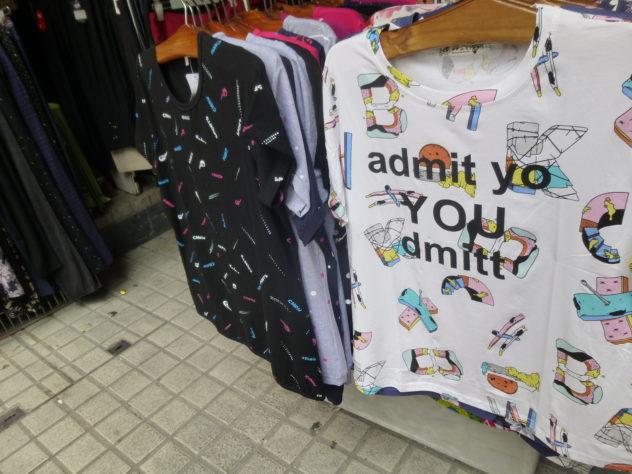 But Would I Return?

Yeah, okay. Why not? But also… why? It was easy to follow the tourist maps provided by the government, and subway and bus systems are clearly marked. Weather was hot and humid but not unbearable, and most everywhere you looked there was a shop to buy food or water, either cheaply or quite expensively depending on your budget. There is vast infrastructure everywhere in China to cater to both groups, and I was lucky enough to experience a bit of both.

Making your way alone in such loud cities can be intimidating, but ignoring the obviously hard part of being illiterate in Chinese and sweating through your dress, exploring cultures is exciting. Without much internet access, the adventure I pursued & the memories I made were different from what I expected, but I’m glad to have experienced these cities in a few very distinct ways. Both cities were pleasant, but they were just too much for my personality. The buildings were too tall and the pollution too much; I won’t be rushing back, but I certainly wouldn’t turn down company on a future trip, either.

Have you ever been to Macau or Hong Kong? Which activity would you recommend to future travelers?

0 shares
May 2017: Exploring Hong Kong Before Settling in for a Good Cry
← Previous
A Different Kind Of DMZ Tour, With A North Korean Defector
Next →
Click here to cancel reply.