There are lots of accessible DIY instructions on the internet these days, especially for recipes. But have you ever followed one, already knowing it would fail? I mean, a lot of things taste better homemade, but unfortunately chocolate is not often one of them.

Making smooth and appetizing chocolate is an involved and expensive undertaking that most all do-it-yourselfers are put off by, often after one glance at the required materials list. Personally, it took 3 years of craft chocolate infatuation before I took the leap to home chocolate making. 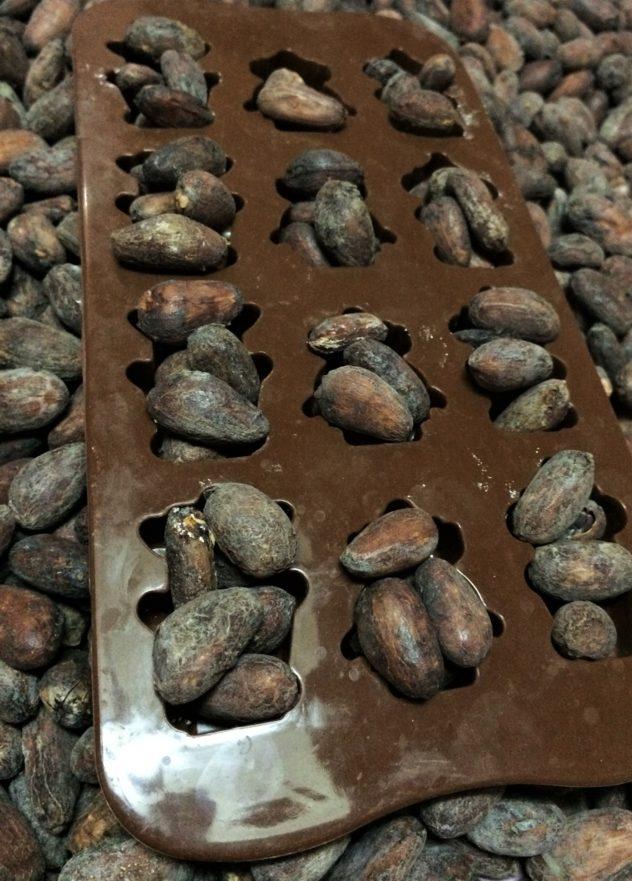 All About the Recipe

Off the bat, I should confess something. Even though I started with 2kg of raw cacao, and roasted and winnowed the beans with good intentions, I snacked along the way. In fact, I munched so much so that my 2000g ended up at ~1350g instead of the expected ~1600g. My human weakness explains the following ratios of cacao to sugar that I used in 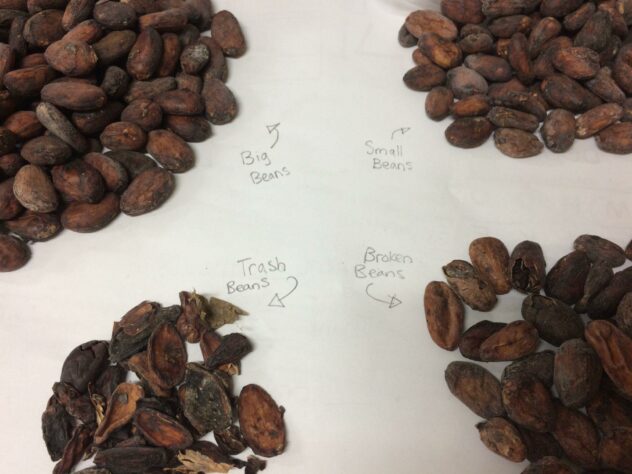 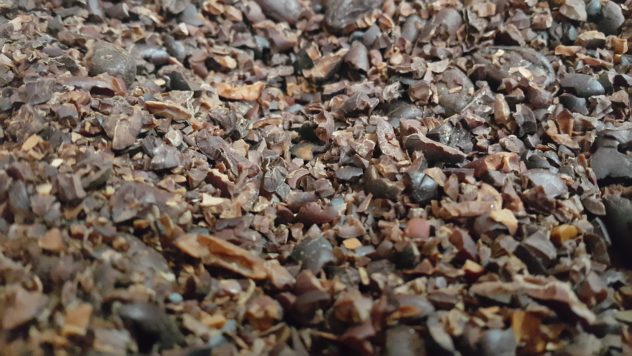 All About the Beans

Age: unknown. I purchased one bag in January & one in April 2017 (from different companies), but they had nearly identical aroma profiles.

Pre-Roast Aroma: unbelievably fruity and acidic, with both bags’ scents overwhelmingly reminiscent of strawberry Nutrigrain bars, if you’re familiar with that (if not, think cooked oats and sickly sweet strawberry preserves), although one bag had a slight cocoa undertone.

Often, acidity can indicate that fermentation went wrong somehow, but this was a pleasant level of acid.

Post-Roast Aroma: it varied between slightly bitter and rather sweet, but the juicy fruit flavors persisted through roasting. As the beans got older, there was a potato chip scent that I could never quite taste.

Post-Roast Flavor: there was a mix of quality in the beans here, reflected in the varying colors and flavors. The nibs range from slightly bitter and nutty to sweet and fruity. I maintain that the beans are of high quality (despite what happened next).

I wish that beans gave exact origins, but I take what I can get. Using the smell test, I felt pretty confident that putting together these two bags of Vietnamese beans would be a positive combination. For all I know, they could be from the very same farm. 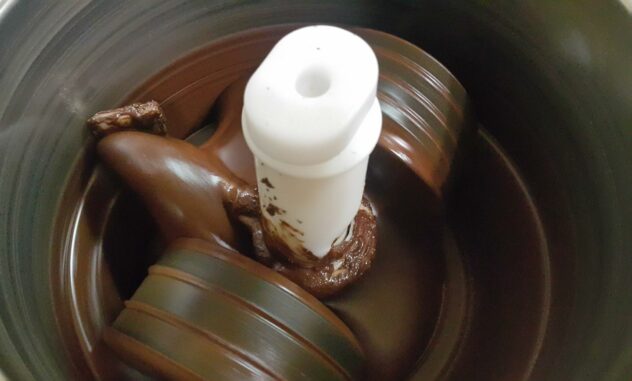 All About the Process

Chocolate doesn’t just appear out of thin air, and logically neither do cacao beans. The trees the beans— which are actually seeds— come from take 3-5 years to bear fruits. After they are picked, it takes at least another 10 days of processing before they are fit to be made into chocolate.

Though chocolate making can be simplified into a 10-step process, each of those steps could be broken down even further. But that’s a rabbit hole I refuse to get sidetracked by at the moment.

Basically, my responsibilities as a chocolate maker are to sort, roast, break, and peel the beans until I have little pieces of cacao called nibs. To create this micro-batch, I started off by warming my nibs in an oven that was heating to but had not reached 100C degrees (212F).

I then added these nibs directly to the machine, a questionable choice at best. With much starting and stopping, the proffered cacao was accepted. But after half an hour of adding nibs 3-4 at a time, I gave in and pre-blended the remaining beans in my cheap and otherwise-unusable blender.

In the already-warm machine, the powdery cacao quickly acclimated. The color was a dull brown, and the acidity coming off the machine was pretty high, though it hadn’t yet lost the strawberry jam smell. There were these horrid stone-on-stone grinding noises every time I added cacao.

However, as I slowly added more cacao the weird noise changed to a sloshing. Each time I got bolder, adding more of the mixture until I was down to nothing. When I finally added the sugar in the last hour, I added it slowly to see how the machine would react.

It seemed to be fine, so I didn’t add the cacao butter I had waiting. Because of this, the chocolate turned out quite thick, as I noted when I took it out of the machine. As fast as possible, I transferred the products into molds with several flavors for mixing, and into containers for aging. 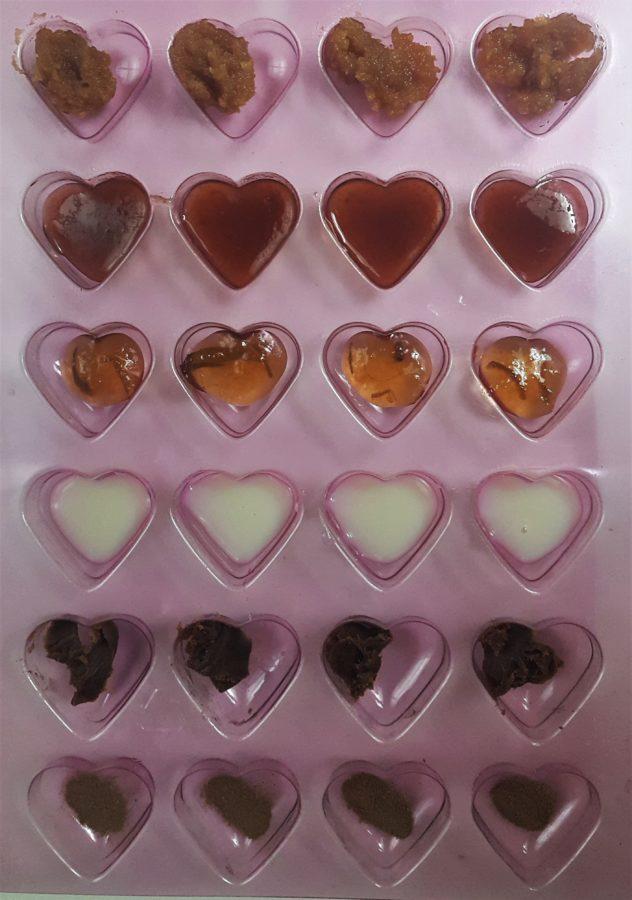 All About the Chocolate

Melt: it’s untempered, so it has a hard, crumbly texture. Throw in the thickness from a low fat percentage, and this isn’t my best work.

Flavor: pleasantly earthy at first, and then meaty tannins and astringent cocoa come in before a bittersweet finish. There are lots of sharp flavors that will hopefully mellow out with aging, but despite this, I maintain that I over-conched the chocolate.

The berry flavor in the roasted cacao transformed into a strong astringency that I believe could have been avoided. In terms of the bean-to-bar chocolates I’ve tried, this ranks low on the scale. To be honest, it was probably doomed from the get-go thanks to my starting it on a Monday night.

That timing forced me into either 20-24 or 44-48 hours of conching. Next time I’ll keep the lid off the refiner the whole time and limit my conching to less than 36 hours, meaning that I’ll have to start and finish the batch on a weekend.

As for the spontaneous homemade truffles, the best flavor combinations were definitely the Filipino coconut jam, and the Aztec spice blend (cayenne pepper, black pepper, cinnamon, nutmeg). Vietnam is a relatively large country, and several makers have highlighted a diversity of flavors within Vietnamese beans.

For the most part, these bars have distinct regional origins that I wish I could also trace my chocolate to. Some of my favorite Vietnamese bars come from Marou, a maker based in Ho Chi Minh City. They consistently work with farmers on the ground and hire local people to work in their factory.

With bars made of beans from six distinct regions of Vietnam— Tiên Giang, Dông Nai, Lam Dong, Bà Ria, Bén Tre, and Tân Phú Dông Island— it is largely Marou’s influence which has created such interest in Vietnamese cacao and chocolate.

Their bars are still quite expensive, but their distribution and exposure is quite wide. Another Vietnamese maker I’ve been reading about is Alluvia Chocolatier, whose bars I reviewed last month. I hope that the next time I get my hands on some Vietnamese cacao, it will have a more flavorful end than my current batch. 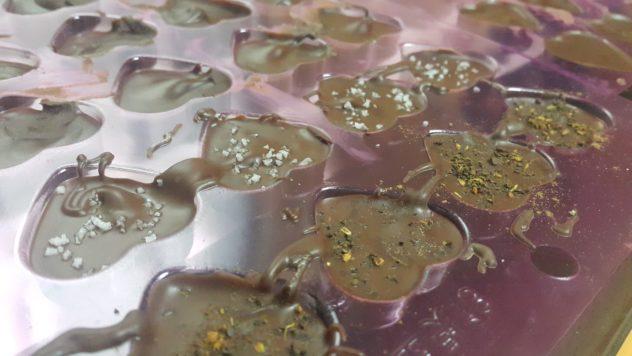 All About The Future

I don’t write that much about chocolate, at the moment. It’s harder to find quality chocolate and cacao in Korea, but not impossible. I live in a very rural place, so shipping can be expensive. There’s no one in my town to talk chocolate with, much less chocolate making.

There are all my excuses and barriers, but I want to scrap them, so I will. I think chocolate should fit the occasion, so I make it as my situation calls for it. But in the midst of my chocolate making class, I’m feeling more inspired than ever to produce the best product I can for my creation team of one and tasting team of a hundred.

I look forward to exploring the flavors of various origins of Asian cacao, and watching them continue to grow in popularity. 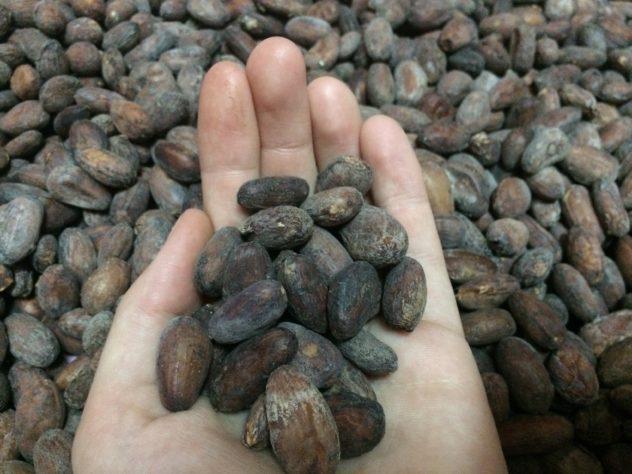 What is your favorite origin of chocolate? Have you ever tried chocolate made with Asian cacao?

That's way too much cocoa butter to add for most origins; it would obscure the flavor of the beans. I won't amend my recipe, because that's the actual recipe I made and enjoyed, but I'm happy to keep this comment here in case your suggestion helps someone else on their journey. :)