I put a lot of negativity on the big four chocolate companies, which still dominate the global market (though their proportion of said market is shrinking). But I’m also not afraid to admit that these companies have a lot of positives on their side. These aspects in no way outweigh many of the negative things they do within the chocolate industry, but they are often undervalued in the craft chocolate world, especially since we aim to steer people away from cheap chocolate & their cheap ingredients.

But sometimes you need to look at the whole picture of the chocolate industry and assess what’s best for everyone. Not all cacao can be of the fine flavor varieties, and not all chocolate should be expensive. The market for chocolate is everyone with two eyes, a nose and a mouth, so we need to consider their needs. Therefore, let’s take a look at seven ways the mass market chocolate industry has done some good in the world, and may even be helping the craft chocolate sector. 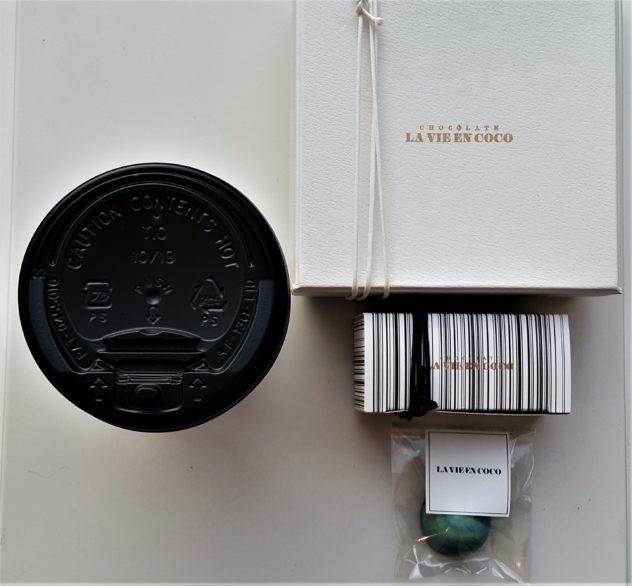 The big four chocolate companies— Hershey, Mars, Kraft, and Nestle— funnel millions of dollars annually into research that keeps the chocolate industry afloat. Thousands of tiny problems could arise anywhere from the farm to the final consumer’s pocket, and the companies with large amounts of capital to invest into preventing these problems are actually doing a lot of good for the entire industry. They fund lots of research into preventing fungus on crops, how to shade trees without leaching resources, and many other problems that arise on cocoa farms. Beyond that, they’ve figured out the least costly methods of transport, marketing techniques, and consumers desires. Not everything that big chocolate companies invest in researching will be useful information for smaller craft chocolate companies, but it’s important to acknowledge the roads they’ve paved for fine chocolate.

On a similar note, not only have big chocolate companies funded numerous studies and research projects which offer insight into chocolate at all levels, but they’ve started up conferences and gatherings at which these findings can be shared. People can network and learn at the same time, which is great, but it’s also provided models for craft chocolate to have our own events. This has helped educate and build a foundation for the craft chocolate community by in many ways providing a solid foundation of best practices and expectations (speakers, workshops, Q&A’s, tastings, etc.).

This is by far the most important item on this list, but it’s also the most obvious. Big chocolate has exposed billions of people to the base flavor of chocolate, now including people in cocoa-growing regions. By knowing that complex flavor that simply can’t be made in a lab, everyone who’s tried a Mars bar or a Nestle chocolate has a foundation from which to learn about and begin buying craft chocolate, if they so choose. On the other hand, they’re also able to continue getting their fix from cheap chocolate, which is hopefully continuing to improve its ethics on its own terms.

This one is a little out there, but one thing Big Chocolate does very well is offer up a sort of “bad guy” for people to point to when explaining how different fine, craft, and bean-to-bar chocolate is from what most people eat. It sounds like a dig at these big companies, and I suppose it is, but every character in a story needs a foil and a “before” picture to point to. In the chocolate industry, there are four characters to choose from, and numerous tiny players to consider on the other side. 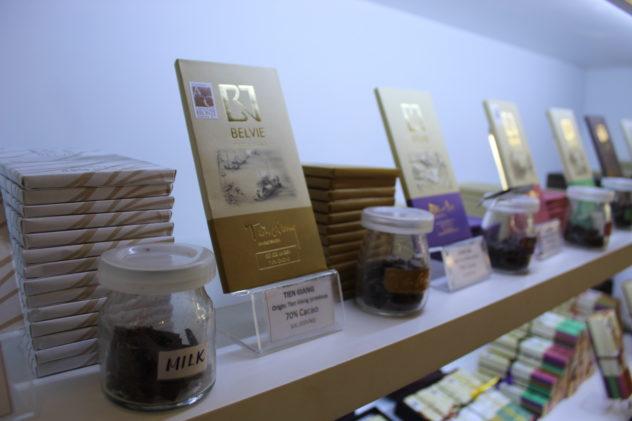 By having such far reach in terms of geographic and demographic market share, in many ways Big Chocolate has helped spread messages and ideals of positivity. I don’t mean body positivity or anything of that nature, but rather the fair trade and organic messages that, though they may not necessarily make the most difference for farmers, put consumers on the path towards knowing more about their food (chocolate and otherwise).

When young children see a fair trade or organic label, they’re more apt to ask their parents about it and start a discussion about labor practices and chemicals and the like. While craft chocolate tends to follow or exceed the guidelines of both of those companies, without the scale of Big Chocolate, it’s not us who’s getting the word out. It’s them.

In a very practical sense, Big Chocolate is educating chocolate professionals who continue to be experts in their field long after leaving the company. Many of these professionals later move on to work in the craft chocolate field, either as consultants for farmers or makers, working in non-profits in the cocoa sector, or even making chocolate. Before small-scale chocolate makers were teaching themselves, they were learning from a very different group of people.

As I noted at the beginning of this article, not everyone can afford craft chocolate. This is in no way to say that the forced labor practices and unlivable wages for farmers should continue, but to remind you that fine food is not for everyone. It just isn’t. Even ethical eating chocolate won’t ever be the default option unless we can manage to make all cacao ethically & sustainably grown. It’s a great goal, of course, but not a very realistic one. So what Big Chocolate offers all consumers is a consistent flavor and group of products, as well as a consistent group of commodity cocoa buyers. For all of the fine flavor cocoa brands out there, there are cacao farmers who just want to grow a little cocoa to sell seasonally and that’s it. Big Cocoa is their market, and this makes them important for people well beyond the aisles of your local supermarket.

If you found this article interesting, please pin it for later! 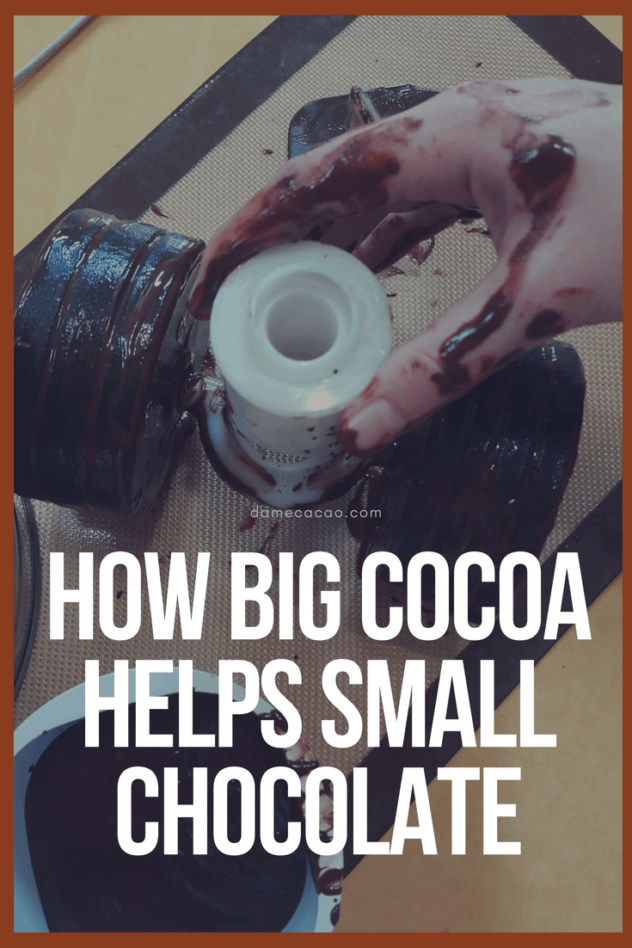 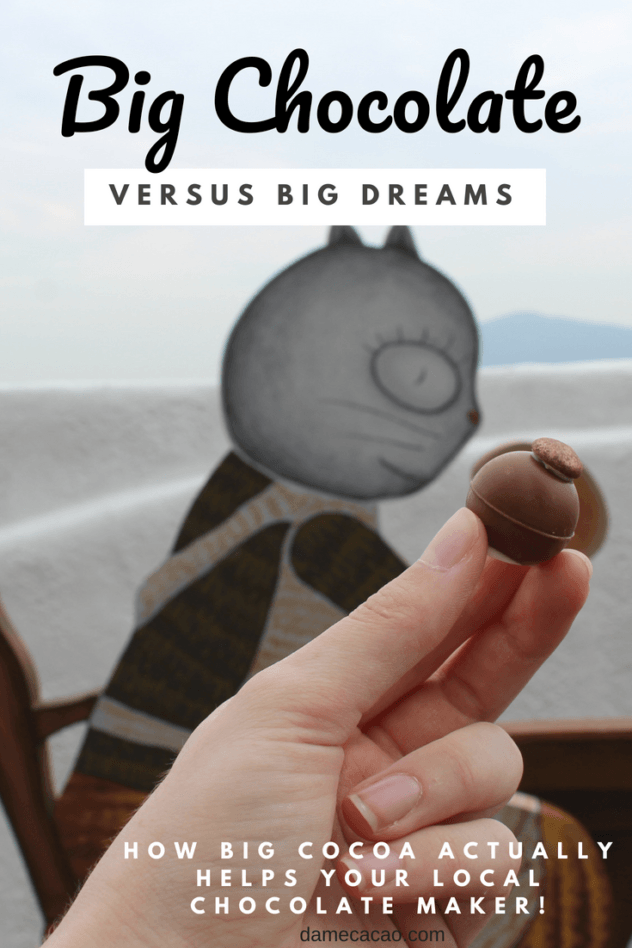 Can you think of any of the counter-arguments for these points?