Last month when I was visiting Mindo, Ecuador, I had the luck of running into José Meza, one half of the chocolate power couple behind Mindo Chocolate. I was so nervous about approaching him that I psyched myself up all afternoon, but it was all for nothing, since he was a great guy and easy subject for an interview. We talked for over an hour about how & why he started Mindo Chocolate, as well as his vision for the future. 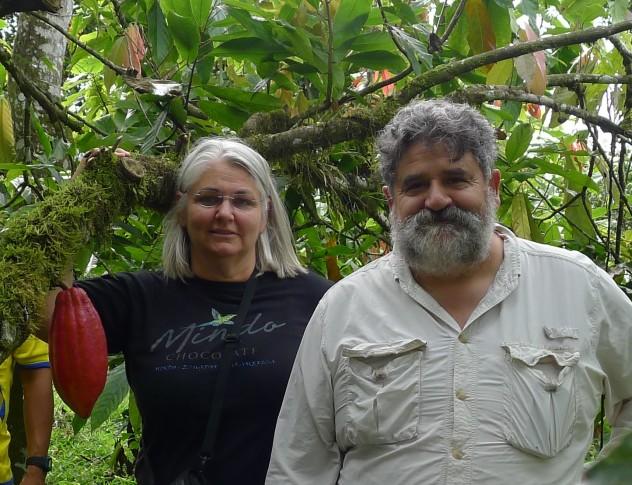 How old were you when you first got into chocolate-making and where did you mainly learn— at home or abroad?

José: I got into it recently, in 2009, both me and my wife. Actually, she got started into the chocolate idea a little bit sooner than I did; I’m an entrepreneur, not a scientist. I’m not really passionate about chocolate, but rather about something good. What turned me around was that I read quite a bit of information about chocolate and how good it is for you, and the fact that the opportunity showed up here. Me and my wife started a café (in Mindo, Ecuador) and we decided to make brownies. But she was never happy with the brownies, so eventually we decided to buy our own cacao, and process it ourselves in very small batches. And then when we presented the brownie it was so amazingly good, totally different than anything else we had done before.

What made you think of the chocolate as the thing that could be changed in the recipe?

J: Well we started using local chocolate, and then she [my wife] brought in Callebeut. Then we thought “wow, this is pretty ridiculous to come to a place that has probably the best beans in the world, and we end up bringing in stuff.” When we used real cacao it made a huge difference. It was an experiment, but the results were amazing. We have people coming in here for the brownies regularly, and I’ve got really good people in the kitchen, people who actually want to keep improving things by themselves. You empower your workers, and they want to come to work. It’s not a chore for them anymore; they are part of the process, they’re not just another cog in the machine. They take ownership of the place, which is very important.

So what year was it that you actually started selling the chocolate as a product?

J: In March 2009 here, we began to make it in really small batches; we used to have the little Champion Juicer. We started processing with the Premiere Wonder Grinder, and they’re great, but immediately we outgrew ‘em. So about two years ago we designed, with the help of one of the engineers in Quito, a ball refiner with stainless steel balls. Now we’re getting particle size down to somewhere in the low twenties in microns. I’m the sort of person who loves this kind of challenge, and that’s the reason that I’m here. Production has grown tremendously. Now we’re actually getting into the bean business, selling (Ecuadorean cacao) to chocolate makers in the States. We went and found six different types of Nacional [a type of cacao indigenous to Ecuador] , all with different flavor notes, and we’re shipping them to the States in beans, nibs and a little bit in chocolate liquor. We even have a few products in the store made from the baba, the juice from the cacao. 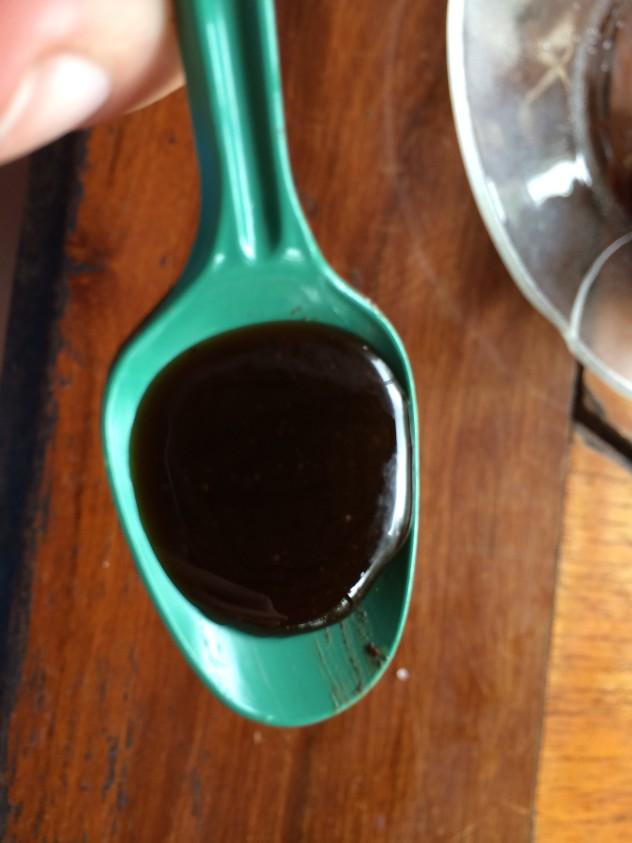 Why were you originally in Ecuador, all those years ago?

J: I came back to visit. I’m originally from Riobamba, Ecuador. So I went to Riobamba, and I didn’t like it there; it had grown so much. When I came through here (Mindo), though, I was amazed at everything. This is perfect weather. I fell in love with this place, so I decided to buy the piece of property, and this is what has happened. In 2008, we built this place [El Quetzal Chocolate Shop].

And how is business these days?

J:  It’s exploded. Just recently I bought 50% shares of a chocolate factory in Quito; it’s called Leyenda. It’s a pretty new company in Calderón, in northern Quito. So I now own 50% of a pretty decent-sized chocolate company, and then I’m taking that container [of Ecuadorean cacao] to the States for the Northwest Chocolate Festival. We’re also going to represent Leyenda there. Mindo Chocolate Makers in the States is also a part of our business, and this bean business that I’m starting is called Cloud Forest Cacao. I also have this crazy notion to sweeten chocolate with the miel de cacao that I’m making. I’m one of those guys who just gives away free ideas, but I think I’m going to (be the one to) do it.

How is your role in the business different from that of your wife’s?

J: I’m the guy that makes things happen. She comes up with ideas, and is a little more organized. She’s a perfectionist, and I am not a perfectionist at all. If someone said “build this thing here,” then I get it built. I use local people and I use local materials. So if we’re going to open up a bean business, then I’ve gotta do it.

So what is your goal, direction-wise, as a chocolate entrepreneur?

J: To make the best chocolate possible. Constant improvement; never ending. Be fearless about trying different things. We want to become a major supplier of beans for the industry in the states, so we’re going to the Northwest Chocolate Festival to present ourselves. (But) we will definitely be catering to very small-scale producers.

I love that you have so many different percentages. How did you come up with those?

J: That was just off-the-cuff. You know how the 77% rustic came into being, was that the people in the Sates called me and said that “all of the machines are broken, all of the grinders are broken,” so I said “take the Champion juicer and grind it, and just mix it with sugar and them temper it.” So they started making it with those things, and then when I got back and we got more machines, people wanted to keep coming back for the rustic ones.

How big was the operation at its start, compared to its size today?

J: At the very beginning I think the first year might have been something like $12K, and then it went up to $35K; this year we’re going to do half a million. And now we have about 22 employees here in Ecuador, and in Michigan we have 4 or 5, not counting my wife and me. My role here is as a motivator, to make sure people keep wanting to do their job just as well if not better.

What sets you apart from the other artesanal chocolate makers?

J:  The model that I like to work with. 90% of the cacao grown in Ecuador is grown on small farms; they do many things, and cacao is one of them. They form associations, and get funding from the government to try and improve their practices. The problem with that being the bureaucracy getting too strong, and the farmer getting a smaller piece of the pie. So the model we are leaning towards is smaller cooperatives, or buying the whole lot ourselves up front, and doing the fermentation and drying ourselves. Our main concern is that the cash is going to the grower. You want to take care of the farmers, but you also want to take control of the fermentation. That’s probably the number one key to making good chocolate, is making sure you’re fermenting the beans correctly. That’s where you can become a genius.

How do you get your inspiration for new products?

J: That’s really easy. The possibilities are so unlimited that we have to work hard not to keep doing more things. Chocolate goes with almost everything. 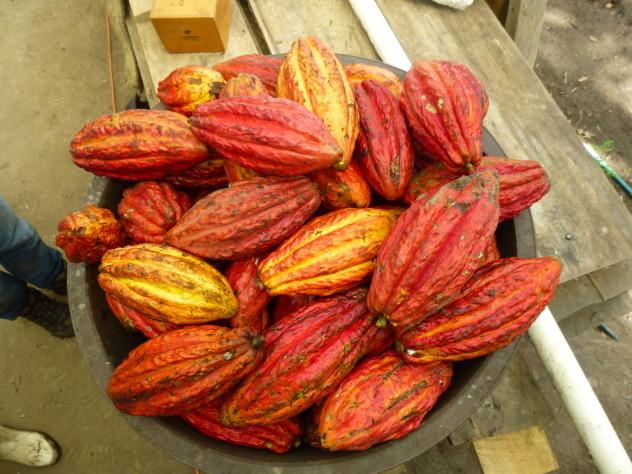 Ecuadorean cacao from a small farm north of Quito.

About how much do you pay per metric ton of cacao?

J: Right now? We’re paying (at this point he rises out of the chair to fetch his phone and give me an exact price)… $4628.40. This is fermented and dried to 7%. That’s a high price here, although I’ve heard that it needs to be closer to $8000 a metric ton for it to be really good for the farmers, so we’ve got a long ways to go, and I’m working in that direction.

About what percentage by weight is left of the cacao after it is sorted and winnowed?

J: The key is the winnower. Roasting takes the beans from 7% to about 1% in terms of humidity, so you lose weight that way, but if you have an extremely good winnower, you can get 80% in nib form from the bean.

Who makes your favorite single origin bar, other than your own?

J: I think Patric has a pretty decent bar from Madagascar. I’ve also liked Rogue’s products, but unfortunately he has a hard time trying to meet demand. He could have a humongous business by now; he’s extremely good, extremely knowledgeable. Dandelion’s chocolate is good.

Where is your personal favorite cacao sourced from?

J: There’s a cooperative in Esmeraldas, and the guy makes an extremely good bean; we’re going to present it (at Northwest Chocolate Festival). We’ve also made chocolate with beans from Vinces, Puerto Quito and Manabí. We have this other guy whose farm is really hard to get to; first there’s this really bad road, and then you have to take a canoe to his place… but that one makes a pretty decent chocolate.

Where do you see yourselves in five years?

J: Hopefully still in chocolate. I mean, in 5 years I’ll be 71 years old, and I guess I’m not going to retire. I don’t think it’s worth retiring. I’ll probably be traveling and discovering more ways to keep improving this product, but there is going to come a time when everything is done.

What is your favorite thing about your job?

And we all hope that new things keep coming up in the chocolate industry, especially on the side of cacao growers. What has been your experience meeting people working with chocolate? Do we seem happier than the average human?