As follow-up to the quite popular 10 Types of Chocolate Makers article, now you can discover what mix of Chocolate Lover you are. It’s rare to be a purebred these days, as so many people are learning about fine chocolate & cacao, so hold on to your chocolate bars, and get ready to say “that is SO me!”

Warning: may cause intense chocolate cravings.

There’s a Mindless Eater in all of us. Mine was most active when I was in middle school and would buy a couple of Three Musketeers bars after getting off the bus, go home and microwave them, and then eat them robotically while watching Sabrina The Teenage Witch. Am I alone in this sugar-fueled past?

If you also have a tendency to break out the chocolate just because you’re bored, hungry, or sad, and then look down and wonder who ate that entire bar, you may be a Mindless Eater. This chocolate lover is prone to buying cheap chocolate, knowing they won’t taste much of it, anyway. Cheap chocolate is generally full of chemicals and sugar that tells your subconscious to keep eating, even though your active brain isn’t fully engaged.

To combat this I’d recommend buying 60-70% dark chocolates with no bitterness or astringency. They’ll cost a bit more than a dollar a pop, but the difference in flavor will immediately shock your brain into looking down and considering what you’re eating. Just don’t buy it unless you know you’ll enjoy it. Read more about buying better chocolate here.

Percentage of the population: 73%

We all have at least one friend who’s learned just a little bit about wine and then suddenly they see everything through that lens. It’s all about the terroir of the cacao and how long the bar was aged and who the maker is. Often it even goes so far as them marveling over the harvest year of the cocoa beans from 2015 versus 2016, and the temper of the bar. I’m fine with admitting that that was me with wine in my early 20’s; I’m still trying to get over that misunderstanding about having nice legs. (Sorry, Leonard!) Craft chocolate lovers tend to have at least a little bit of this manner of speaking when discussing expensive chocolates bars, largely to justify the $15 price tag.

“It’s just like a bottle of wine; you have to spend money to have a nice bottle.“

While this can be true, I’ve also has some crappy $15 chocolate bars that I regretted immediately. Most have been worth it— unlike the $15 bottles of wine— but at the very least the crappy wine made me forget about the cheap quality by the time I got to the bottom of the bottle.

Percentage of the population: 4%

It’s unclear whether I underestimate the Trend Seekers or they underestimate me. I feel like I can sniff them out a mile away, and Ruby Chocolate is a prime example of this. To be clear, this is not a me versus them category, because I myself am part Trend Seeker (though it’s more out of necessity as a chocolate writer). In order to stay on top of what’s hot in chocolate (and I don’t mean the cocoa), I closely monitor the activities of Trend Seekers and their cousins who are setting the trends.

Observe and become, I always say.

Once Trend Seekers start seeing a brand or a bar everywhere, they simply have to have it. Ruby was a good example because even though it would emerge onto the global market in the summer, people were still willing to pay a hundred dollars for just a few candy bars in February and March, simply because they wanted to be the first. Trend Setters weren’t the ones making Ruby Chocolate pop, but they were definitely the people trying it and disseminating it in late 2017.

Percentage of the population: 10%

In case you didn’t know, about a quarter of the population is part of a group called “super tasters,” basically meaning that they have more taste buds in their mouth. This makes them more sensitive to strong flavors such as bitterness or those unique qualities of Brussels sprouts, cilantro, and anise that offend many eaters. Are you unfamiliar with scrunching up your face in disgust after eating an ill-prepared Brussels sprout or an anise-flavored curry? You’re probably not a Super Taster.

Being a Super Taster is not synonymous with being a Wino or a food snob. It just means that you tend to stay away from bitter and other strongly-flavored foods. Many a Super Taster has fallen prey to the allure of a Three Musketeers or a Mars Bar. Trust me, I’m an expert.

Percentage of the population: 25%

Sort of the people we all want to be, Luxury Lovers simply want the best of everything, and rarely do they get it themselves. These exceptional humans tend to have wealth beyond imagination (or at least pretend to), and thus they have sources or anything & everything and rarely have to wait. Their philosophy is that the most expensive item must be the best, so bring on the Dom Perrignon and To’ak chocolate.

Percentage of the population: 1%

Sometimes mixed up with the Complete Locavores, Ethical Consumers prioritize the origin of the ingredients not because they care about the flavor nuances, but because they want to make sure that they’re buying products untainted with human or environmental damage. In the case of chocolate, this often means that they only buy Fair Trade products, which can make you think that ethical chocolate tastes like crap if you buy the wrong one (see: Everyday People).

Quite the contrary, most of the best-tasting chocolate out there is not only ethical but direct trade. This means that the chocolate makers source their ingredients direct from the farms. What the Ethical Consumers would benefit from is taking a page from the Winos’ playbook and going to specialty shops for their chocolates rather than a Trader Joe’s or Whole Foods. That’s where you’ll get much more bang for your five-to-ten bucks.

Percentage of the population: 11%

All they want is the prettiest package.

Occasionally these are the people who’ve had an amazing chocolate that they’ll run to the ends of the earth to buy again because they need their niece to try it. But usually the Gift Givers have wandered onto an online shop because all they know is that their niece likes chocolate and it’s their birthday next week, so they want to buy them something nice. Preferably name brand.

Godiva’s the best stuff out there, right?

Percentage of the population: 24%

That chocolate bar with the shrimp on it or the ramen-flavored “unroasted chocolate” bar are just some of the chocolate creations you’ll find in the Adventurous Foodie’s stash. Boasting a solid imagination and strong fear of regret, these chocolate lovers are up for basically anything. The stranger, the better.

This isn’t to say that they’d eat just anything as long as it’s covered in chocolate (though they might), but that they have a healthy sense of adventure and love to expand their palate. Food is a cultural experience, especially when it comes to fine chocolate, an industry wherein inclusion bars and unique uses of local ingredients are definitely the future. If you can’t travel to Paris or India, you can at least taste them in your dessert! As for me, I’ll pass on the crickets and durian; thanks.

Percentage of the population: 14%

The Complete Locavores are obsessed with consuming only area-made and regional products, keeping the economic benefit at home. This choice is often not simply economic, but a result of deep pride in and hope for the continuance of their community, specialty foods included. Often confused with the Ethical Consumer, Complete Locavores are often more financially well-off, and can be convinced to spend a relatively large amount of money on a chocolate bar as long as it was made locally.

They’ll still see it as a splurge, however— unlike that $9 jar of apricot confit— so they’ll likely need to be pitched on the same chocolate each time. Don’t worry, you can pitch them the same way; you just have to do it again and with equal enthusiasm.

Percentage of the population: 6%

Sometimes the Everyday People just decide that enough is enough and today is the day to mix it up. Other times they’ve simply stumbled upon an article about what makes chocolate healthy and decided to click around the site, completely changing their perspective on quality chocolate. Godiva? I don’t think so. Their world opens up when read all these reviews of amazing chocolate bars made with ingredients from all around the world.

They decide to go out and try one, only their local Whole Foods doesn’t sell any of these brands so they settle for one of the nice-looking ones with the animals on the front. Big mistake. “This tastes horrible!” they shout, throwing it on the ground. Then they go back to their Mars bar, never realizing how sad the wolf on that package became, not because he was thrown on the ground, but because the chocolate inside him was so very unsatisfying.

Everyday Consumers should immediately check out this article on the most ethical chocolate brands to buy in Whole Foods, and never buy bars based on cute animals ever again.

Origin: every single place on Earth

Percentage of the population: 89%

Okay, yeah, so these percentages don’t exactly add up to a hundred. As I’ve said from the beginning, not everybody fits into just one category.

In fact, every single person who managed to stumble upon this article has definitely fallen into more than one of these categories, depending on their place in life. Not to get too philosophical, but the older you are, the more likely it is that you can look back at who you’ve been and notice parts of yourself in several or maybe even all of these descriptions. The point of it all is humor rather than self-reflection, however, so I hope you do go give into that sudden chocolate craving.

In fact, in case you don’t feel like leaving the house right now read about the best chocolates you can buy online (while you’re daydreaming about chocolate, that is).

Which type of chocoholic are YOU?

If you found this article interesting, please pin it so that others can, too! 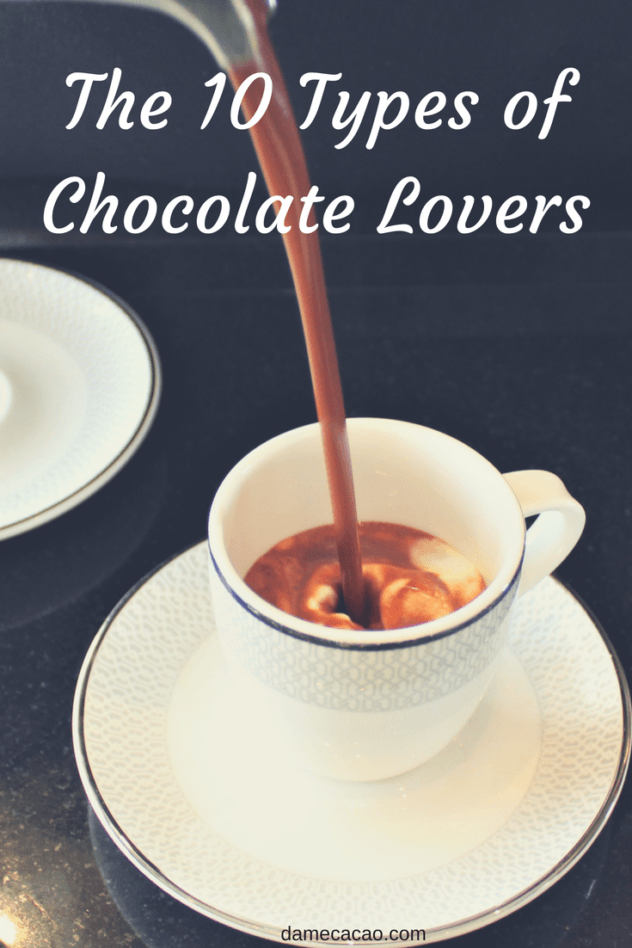 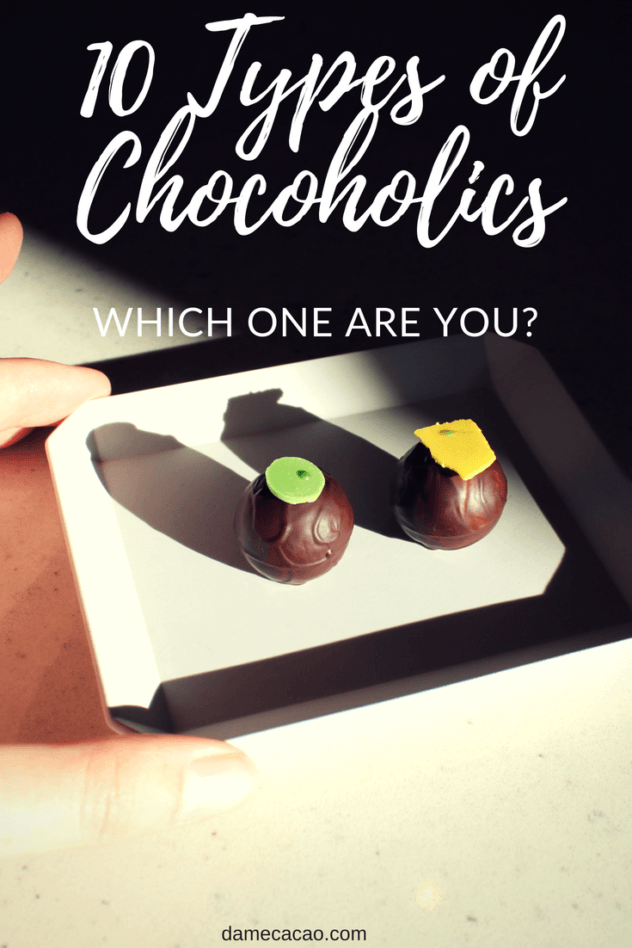 Where's the type that just "knows what they like" and don't care much about brands, trends, and, to lesser extent, price? We're there in every field -- food, art (especially art), clothes.... So surely we deserve to be a type of a chocolate lover. And I can think of several ways to humorously describe our type.

That's fair. I'd nestled in that type with the "Everyday People," but I suppose that's because I forget that price isn't as much of a factor for some people. For those for whom it isn't a factor, usually at that point they're buying craft chocolate or not even paying attention to their chocolate! But not everyone who can will convert to craft; that's a good point, Jay.